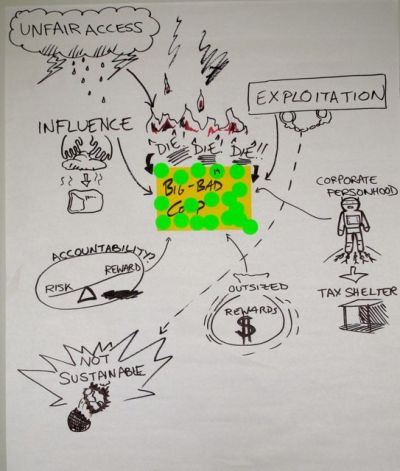 Visual Thinking School is a workshop offered by Dachis Consulting Group that invites creative participants of all stripes to come together to brainstorm solutions to various challenges. I participated as a guest in the December challenge, which took Occupy Wall Street on as a “client”. The objective of the workshop was to clarify the goals of the movement, identify core audiences, generate priority messages, and suggest message and strategy tweaks. The time frame is very compressed (2 hours!) and the session was most excellently facilitated by Tom Bennett of Dachis Group/XPLANE.

After an initial open brainstorming session, the group identified the following themes as central to the movement: Big Bad Corporations, Inequality, Money in Politics, and the Dynamics of the Occupy movement. We broke into smaller groups to work on fleshing out the themes and then regrouped for a short presentation.

The next step was to understand the different audiences of the movement, so we split into 5 groups: Corporations, Government, The Media, Protesters, and the General Public. We used a Dachis Group framework called the “Big Head” to focus on what each audience was seeing, hearing, thinking, and doing relative to OWS. My group focused on The Media – how it is currently representing the Occupy movement and how the movement might create more strategic methods for communicating clearly with the media in order to clarify its mission and goals.

This was a great opportunity to apply design thinking skills to a nebulous problem, one that many people identify with in theory but not in practice, to develop ways the movement could become relevant to more people.